The coast and adjacent ocean

What is the coastline of Antarctica like, and what physical processes occur along the coast and in the Southern Ocean?

Study the following images taken along Antarctica’s coast. Attempt to identify the features shown in the images and describe the physical processes that are occurring.

Only about 5% of Antarctica’s coastline is what we would think of as typical for a coast – land (or rock) meeting the sea. Instead, nearly half of the coastline consists of the edges of ice shelves, and there are also places where grounded ice meets the sea. The key distinction between ice shelves and the fronts of grounded ice masses along the coast is that the former are floating whereas the latter are resting on bedrock.

To understand the processes that occur along Antarctica’s coast, it is important not to confuse ice shelves with sea ice. As introduced in Ice sheets and glaciation, ice shelves are the seaward extensions of glaciers, and are therefore made up of glacier ice. They can be hundreds of metres thick; and, because they are the floating part of larger glaciers, the ice within the ice shelves can flow at speeds of several hundred metres per year. Once glacier ice has reached the edge of an ice shelf, it eventually breaks off forming an iceberg. This process, termed ‘calving’, is the main form of glacier ablation in Antarctica.

In contrast with ice shelves, sea ice is frozen sea water that is usually only a few metres thick, and its extent varies greatly with the seasons. Because of the salinity of the ocean, freezing occurs at about -1.8°C; and as the sea ice forms, some salt is expelled thereby increasing salinity of surrounding water. Near the coast the sea ice is referred to as ‘land-fast ice’; whereas further out to sea where it can be moved by ocean currents and wind, it is termed ‘drift ice’. Large areas of drift ice are called ‘pack ice’. Around Antarctica, the area covered by sea ice expands from a low point of around 3 million km2 in February to about 20 million km2 in October (an area exceeding South America in size).

Watch an animation of this extraordinary pattern of seasonal variation 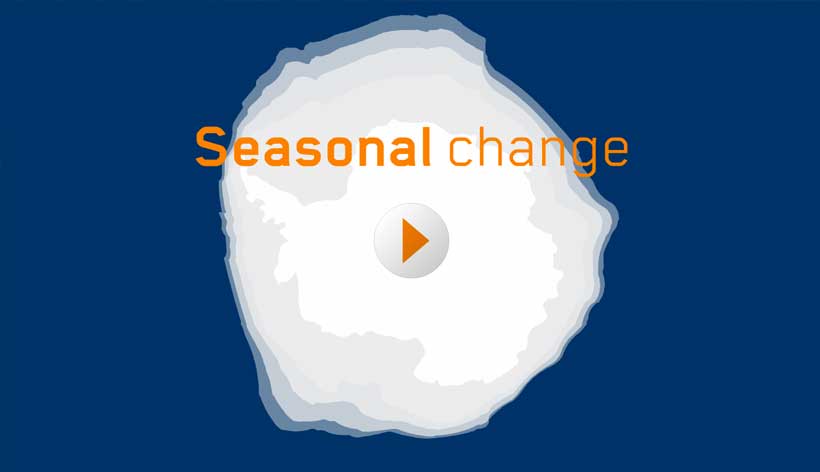 The Southern Ocean encircles Antarctica, and its area is usually defined as extending from the edge of the continent (and its ice shelves) to the position of the ‘polar front’ separating it from the surrounding Pacific, Indian and South Atlantic Oceans. This Antarctic Polar Front marks the location where there is a strong contrast in the temperature of the sea water: the Southern Ocean water is significantly colder than the waters of the surrounding oceans, ranging from -1.8°C near Antarctica to about 3.5°C near the polar front. The polar front boundary is relatively stable in its position through the year, but the latitude at which it is found varies around the continent. For instance, the frontal boundary between the Southern Ocean and the South Atlantic is located at around 50°S; whereas the boundary with the Pacific Ocean is in places more than 60°S. The Antarctic Polar Front itself is a narrow zone, about 40km wide, across which sea surface temperatures rise by 2 to 3°C. According to this way of defining the Southern Ocean, its area is 31.8 million km2, constituting nearly 9% of the Earth’s total ocean area.

There are a great variety of ice shelves of different sizes and thicknesses along Antarctica’s coast. As noted in Ice sheets and glaciation, the Ross Ice Shelf and the Ronne-Filchner Ice Shelf are the two largest. The size of an ice shelf is determined by the balance between accumulation and ablation. Although some snow may fall on the ice shelf, most of the accumulation is from the mass added to the ice shelf from the grounded glacier ice behind it. Ablation of the ice shelf occurs through melting due to contact with the sea (both along the edges of the ice shelf and beneath it) and by iceberg calving.

In recent years much research has been devoted to measuring the velocity of ice flow in ice shelves and mapping changes in their size and shape. This is because ice shelves are seen to be an important indicator of climate change in the South Polar Region. The ice shelves of the Antarctic Peninsula have been intensively studied because over the last 50 years the average air temperature in this region has increased by about 3°C, contributing to enhanced melting, retreat, and collapse of several of the ice shelves. The Larsen A Ice Shelf broke up dramatically over a matter of weeks in 1995, and Larsen B disintegrated in 2002.

The latest ice shelf to experience significant break up is the Wilkins Ice Shelf which is located on the western side of the Peninsula and to the south of the Larsen ice shelves. In April 2009 part of the 25 mile strip of the ice shelf that formerly connected it to a small island broke up, releasing hundreds of icebergs.

Since ice shelves float, they do not contribute directly to sea level rise as they melt and break up. However, they have an indirect effect because the removal of an ice shelf causes the grounded ice that was formerly buttressed behind it to flow with greater velocity towards the coastal ablation zone. As the grounded ice experiences increased ablation, this transfers more water from land to ocean, thereby causing sea level to rise.

The warming of the past 50 years has caused the limit of ice shelf viability to retreat southward along the Antarctic Peninsula; and if the warming trend continues, as seems likely due to increases in atmospheric greenhouse gases (see Climate change: past and future), more ice shelves will break up and increased ablation from land-based Antarctic ice will contribute more to the total eustatic rise in sea level. Over the long run, sea level rise itself poses a threat to land-based ice because more of it becomes floated – i.e. the ‘grounding line’ of the ice moves inland, and this can accelerate the process of ice shelf break up and ice sheet ablation. Although not seen as an immediate threat, there are concerns that, with further temperature and sea level rise, the West Antarctic Ice Sheet could lose a lot of mass through these processes because so much of it rests on bedrock below sea level.

In contrast with the Arctic, where the extent and average thickness of sea ice has declined dramatically in recent years, the trend for sea ice in the Southern Ocean is less clear. However, with continued global warming, it is likely that sea ice will become less extensive in the Southern Ocean. This in turn would have implications for the south polar climate: the presence of sea ice makes conditions much colder than they would otherwise be, because of the increased albedo (reflection of sunlight) and the reduced ocean-to-atmosphere heat exchange that results when the ocean becomes capped by sea ice. A declining trend in sea ice extent has been observed for the area around the Antarctic Peninsula. Through positive feedback, this could lead to further warming in the region which would then reduce sea ice further.

Circulation of the Southern Ocean

There are two types of ocean currents in the Southern Ocean that are fundamental to understanding the ocean’s characteristics, climate and ecology: the clockwise Antarctic Circumpolar Current and the formation of Antarctic deep water.

The Antarctic Circumpolar Current is the biggest ocean current in the world, transporting some 3 million km3 of water around the continent annually. It arises because of the strong and consistent prevailing westerly winds in the southern mid- to high-latitudes. Unlike in the Northern Hemisphere, the mid-latitude westerly winds are not impeded by large land masses and areas of high relief. There is also a stronger pressure gradient from the mid- to high-latitudes in the Southern Hemisphere due to the cold climate of Antarctica. This causes the westerly winds to reach a higher velocity and to move in a more straight (or zonal) fashion from west to east around Antarctica, causing surface water to do the same. With the surface water circling around the continent, there is less scope for warmer water from the surrounding oceans to bring its heat near the continent. The oceanic polar front is also maintained as a strong thermal boundary between cold southern water and warmer mid-latitude water.

Antarctic deep water (also known as Antarctic Bottom Water or AABW) forms when surface water reaches a temperature and level of salinity that makes it denser than surrounding water. The water then sinks to the bottom of the ocean and moves away from the Antarctic continent into the other oceans. The salinity of surface water (and hence density) increases because salt is expelled during the process of sea ice formation. As a lot of sea ice forms in the Weddell and Ross Seas (and the water gets very cold) these are the main areas for the formation of AABW. The water forming AABW is more dense than any other water mass in the world, and it is an important component of a much larger, global-scale circulation system known as the ‘great ocean conveyor’.

This conveyor system is also referred to as the ‘thermohaline circulation’ because of the role of both temperature and salt in creating sea water masses of different densities. The thermohaline circulation is important for the world’s climate because it causes warm and cold masses of water to move around the globe and to redistribute heat. In the North Atlantic, the formation of North Atlantic Deep Water (NADW) is critical for keeping the British Isles (and the rest of north-west Europe) more mild in winter than would otherwise be the case, considering Europe’s latitude. As the NADW forms and sinks, surface water from lower latitudes moves northward to replace the descending water – this increases sea surface temperatures in the North Atlantic which in turn contributes warmth to the atmosphere. AABW and NADW are the two major deepwater masses in the world. You can see diagrams and learn more about the global thermohaline circulation system by clicking on these links:

Use an atlas, or the web links listed below, to locate and label the major ice shelves of Antarctica. Download and print the base map of Antarctica.

Base map of Antarctica

Use an atlas, or the web links listed previously, to locate and label present and former ice shelves of the Antarctic Peninsula. Download and print the base map of the peninsula.

Base map of peninsula

Download this spreadsheet which contains data of the real coverage of Antarctic Peninsula ice shelves measured at different time periods:

3a Copy the data into your own spreadsheet and do the following:

3b Referring to the graph, to what extent does ice shelf retreat relate to location along the Antarctic Peninsula?

3c Write a paragraph or two that summarises the current state of ice shelves in the Antarctic Peninsula and that considers what is likely to happen in the future if temperatures continue to rise.