Where is life found in and around Antarctica, and what are the ecological characteristics of the continent? Why is there far more biomass in the seas surrounding Antarctica than on the continent itself?

Compared with other continents, Antarctica contains very little biomass; and what life is there is mainly concentrated near the coasts. However, it is a different story in the Southern Ocean: unlike the land, the surrounding seas are very productive, and have been exploited in various ways by people for well over a century. At first glance it may seem that Antarctica supports plenty of wildlife, the iconic penguin colonies for example, and the abundant seals that can be seen along the coasts. However, it is important to remember that these animals are supported by the productivity of the Southern Ocean and are part of the marine ecosystem.

This section provides a summary of ecosystems in and around Antarctica, and explains some key ecological concepts that support the more detailed discussions of the terrestrial and marine ecosystems in the next two sections.

Review your knowledge of the topic by matching the correct definitions to the terms in the next activity. 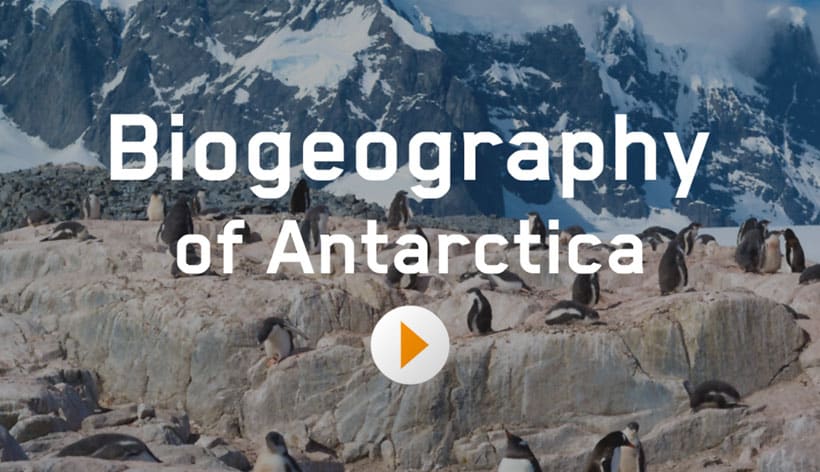 Review your knowledge of the topic by matching the correct definitions to the terms in the activity.

Less than 1% of Antarctica’s area is ice free, so there is little terrain suitable for the development of soils and vegetation. Most of these ice free areas exist at low altitudes near the coast, especially along the Peninsula. However, ice free areas are also present away from the coast as nunataks and in some dry, windswept valleys – such as the Dry Valleys of Victoria Land near the McMurdo research station. The cold climate, coupled with low moisture availability (since the water on land is usually frozen) means that biological productivity is very limited. No trees or shrubs exist on Antarctica (although there were trees in the geological past as described in Tectonic history: into the deep freeze), and what little vegetation there is mostly consists of various types of mosses, lichens and liverworts. The vegetation communities and the adaptations of different Antarctic plants are discussed further in the next section.

A starting point for understanding Antarctica’s biogeography is to consider the factors that affect plant productivity and how these factors vary across the continent. Of course, plants grow by making their own food through the process of photosynthesis (they are autotrophs), and therefore the key factors affecting plant productivity are the same as those affecting the ability of plants to photosynthesise: namely, the availability of sunlight, carbon dioxide, and water. In addition, in order to build tissue and maintain life functions, plants need several other elements, some in relatively large quantities (such as nitrogen and phosphorus) and some in smaller or even trace quantities (such as iron). Collectively these are known as plant nutrients. Finally, even if the conditions for photosynthesis are met, and all of the required nutrient ‘building blocks’ are available, the rate of growth will be affected by the air temperature. This is because temperature affects the rate at which chemical reactions, and associated biological processes, take place. The rule of thumb is that a 10°C rise in temperature causes a doubling in the speed of chemical reactions. In addition to limiting rates of plant growth, low temperatures also limit rates of rock weathering, and hence the release of nutrients from rock and the development of soil.

Keeping the above in mind, it should be obvious why Antarctica has low plant productivity. Not only do cold temperatures limit growth rates and moisture availability, but the amount of sunlight varies drastically with the seasons. It is useful when studying productivity to make the distinction between gross primary productivity (GPP) and net primary productivity (NPP). The former refers to the total product of photosynthesis in the ecosystem (all of the chemical energy fixed from sunlight); whereas the latter refers to the chemical energy that is left over after the plants have used some of it for their own respiration. NPP is often expressed as the dry weight of organic matter produced per unit area per year (g/m2/yr). A low GPP means an ecosystem has a low energy input, little plant growth, and therefore also a low biomass (total dry mass of living material measured per unit area). The NPP represents the energy that is available to organisms in the ecosystem that are not autotrophs, such as consumers and decomposers. Because the NPP of ecosystems in Antarctica is so low, there is not much energy available to support these other types of organisms. Another rule of thumb for ecosystems is that energy transfer is on average only 10% efficient from one trophic level to the level above. This principle, which applies in all ecosystems, means that the total biomass of the consumer organisms will always be much less than the total biomass of the producers.

With such a low NPP to start with, Antarctic ecosystems cannot develop long food chains or support large vertebrate consumers; and biodiversity is low. The largest animals supported by these ecosystems are two types of midges! In contrast, photosynthesis by floating plants in the Southern Ocean (mainly phytoplankton) create a far higher NPP and represent a huge biomass that can support long food chains and large animals, such as the penguins and seals already referred to, and the great whales.

The Antarctic ecosystems themselves can be divided into different types which are found under different environmental and climate conditions, and are described in more detail in The terrestrial environment. At the far extreme, the ice sheets are practically devoid of life, although certain types of single-celled algae can grow on the surface and edges of ice (where there is occasional melting) near the coasts. They stain the snow surface with red, green or yellow hues. Amazingly, dormant micro-organisms (such as bacteria, fungi, and micro-algae) have been found deep within ice cores. These micro-organisms can be hundreds of thousands of years old, but are still capable of growth when cultured.

In the scattered ice free regions inland, such as the Dry Valleys, there are very simple, small-scale, low productivity ecosystems consisting of hardy lichens, algae and fungi. Although still low, productivity increases in the coastal areas where temperature and moisture availability are higher, with the highest productivity and most species diverse terrestrial ecosystems being found at ice free locations along the Peninsula. There are also lake-based (lacustrine) ecosystems on the continent containing types of bacteria, phytoplankton, mosses and crustaceans. These too are located in areas free from glacier ice near the coasts.

The islands offshore of the continent (sub-Antarctic) have more productive and biodiverse ecosystems because of the warmer temperatures, more humid atmosphere and greater moisture availability. Ice free areas of South Georgia, for example, have much thicker vegetation cover than exists on the continent, consisting of grasses, rushes and mosses.

The higher NPP of the sub-Antarctic islands sustains larger animals, some of which are native and others that have been introduced.

Productivity in the ocean is not constrained in the same ways as it is on land; although organisms display many remarkable adaptations to cope with the cold waters. Examples of such adaptations, and the environmental factors affecting the productivity of marine ecosystems, are presented in The marine environment.

With the help of the text above, or the web link listed below, write brief answers to the following: