Tectonic history: into the deep freeze

How has Antarctica’s landscape changed over geological time and why?

Look at the photographs of fossils found in Antarctica and consider for yourself what these imply about Antarctica’s landscape in the distant past.

As these fossils suggest, Antarctica hasn’t always been as cold as it is now. Before Captain Scott and his team perished during their return journey from the South Pole in 1912, they had collected a number of important fossils from near the Beardmore Glacier in the Transantarctic Mountains. When this collection was retrieved and analysed, it was found to contain fossils of an ancient ‘seed-fern’ tree (Glossopteris). Not only did this prove that the continent must have been much warmer in the past to support such vegetation, but the similarity with Glossopteris fossils found in South America, South Africa, and Australia gave strong support to the emerging idea, championed by Alfred Wegener, that the continents were once joined and have since moved apart – the theory of ‘continental drift’.

During the 1960s, the mechanisms behind continental drift finally became understood and our modern theory of plate tectonics was born. As with other continents, sea floor spreading in some places and subduction in others has caused Antarctica’s position to change over geological time; and hence Antarctica hasn’t always been located over the South Pole. Indeed in the distant geological past, the pattern and configuration of tectonic plates has been very different from today. For example, about 450 million years ago the crust that makes up England was in the Southern Hemisphere while crust making up Antarctica straddled the equator!

Some 200 million years ago, Antarctic continental crust was joined with South American, African, Indian, and Australian continental crust making up a large southern land mass known as Gondwana (the southern part of the supercontinent called Pangea). After this time, Gondwana slowly split apart to create Antarctica as a separate continent, and Antarctica has gradually moved away from the other southern continents towards its present polar position.

more about the past

Into the deep freeze…

So how and why did Antarctica go into the deep freeze? From the discussion above, you will know that the continent’s gradual movement towards the South Pole had something to do with it. However, this is not the whole story: a polar position may be necessary for a continent to accumulate an ice sheet; but this alone does not explain why the continent is so cold and the ice cover so large. A full explanation requires consideration of other large-scale changes that took place involving Earth’s topography and atmosphere that helped to isolate the continent’s climate and to reduce the amount of warmth transferred to Antarctica from the lower latitudes.

Before looking at the full range of causes, it is worth summarising Antarctica’s tectonic history from when it was part of Gondwana onwards (million year = myr):

About 180 myr ago (in the early Jurassic), rifting begins to split Gondwana apart eventually creating an extensive sea between Africa and Antarctica by 150 myr ago.

Africa and South America begin to split apart about 130 myr ago (in the early Cretaceous), with the Indian subcontinent breaking away from Antarctica and moving north about 125 myr ago.

From about 100 myr ago (later Cretaceous) the crust of Australia and New Zealand begin separating from Antarctica. By this time Antarctica is already positioned over the South Pole.

By 40 myr ago (Tertiary times) there is a wide sea between Antarctica and Australia, and from about 35 myr years ago the Antarctic Peninsula separated from southern South America to open up the Drake Passage.

As the continent moved towards its present position, its climate changed in response to the greater seasonal differences in sunshine and the overall reduced level of solar input associated with higher latitudes. However, even when its position was close to that of the present day, about 100 myr ago, it still had a much warmer climate than now. There is fossil evidence for polar forests at various times reaching as far as 85°S. Therefore, Antarctica’s position alone cannot explain its cold climate today.

Instead, we must turn to larger scale factors that altered the global climate from the Cretaceous Period towards the present. Around 100 myr ago the concentration of carbon dioxide (and other greenhouse gases) was much higher than today, causing a warmer lower atmosphere across the whole planet and preventing the build up of glacier ice anywhere. Additionally, the pattern of land and sea near Antarctica was such that warm currents could penetrate into high southern latitudes to moderate the polar climate.

Although concentrations of greenhouse gases are believed to have fluctuated during the Cretaceous and Tertiary Periods, they have decreased towards the present, particularly after about 55 million years ago, coinciding with a long-term global cooling trend. Two important tectonic events also explain the cooling of Antarctica: the widening of the sea between Antarctica and Australia and the split between South America and the Antarctic Peninsula. These changes in land/sea configuration were crucial for the establishment of the cold Circumpolar Current that circulates clockwise around the continent preventing warm water from reaching the coast.

Studies of rock formations on the continent and sediment deposits from the sea floor indicate that Antarctic glaciers began to form in favourable locations during the late Eocene, perhaps as much as 38 myr ago. However, even as late as 14 myr ago, fossils of tundra vegetation recently discovered from the McMurdo Dry Valleys show that the climate was similar to that of the southern tip of South America at present. Shortly after this time, Antarctica cooled further and the East Antarctic Ice Sheet reached a size similar to today about 13.8 myr ago. The West Antarctic Ice Sheet reached its full state about 6 myr ago. This is much earlier than in the Northern Hemisphere where glaciers did not develop into ice sheets until after 3 myr ago.

The precise reasons for the cooling of Antarctica and the timing of ice sheet formation are complex and still the subject of much research. While tectonic processes and a decline in greenhouse gases played a role, there were also changes in the pattern of atmospheric circulation and changes in the Earth’s total energy balance. Climatic factors are discussed in detail in Section 2, but two key ideas from climate studies must be introduced here: the concepts of albedo and feedback processes.

Feedback mechanisms respond to changes in atmospheric, ocean and surface conditions all over the world. Sometimes the feedback can increase the effects of the process (positive +), or restore conditions to their original state (negative -).

Here is an example of a positive feedback loop: 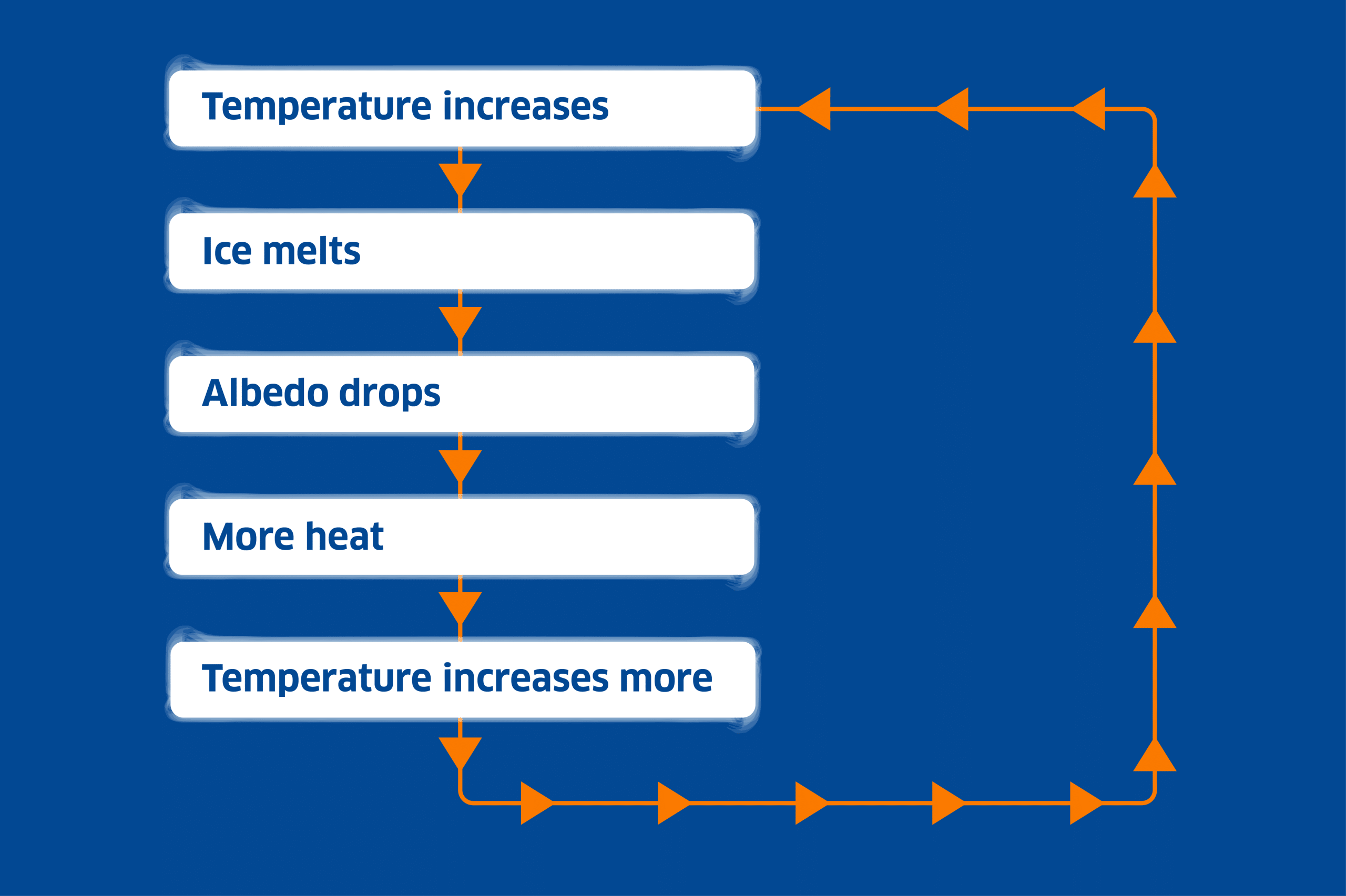 Once ice on Antarctica began to spread, the process reinforced itself through positive feedback mechanisms. With more ice, there was more reflection of sunlight back to space (a higher albedo) and this acted to further cool the surface temperature of the continent. Moreover, as the ice sheets grew, the surface became higher and therefore cooler. Similar feedback mechanisms involving albedo and other climate factors were happening on a more global scale as the Earth made its transition from warmer conditions during the Mesozoic Era to cooler conditions during the Cenozoic Era, culminating in the Ice Age of recent geological time.

1a. Draw a time line that extends from 200 million years ago to the present, labelling and marking the major geological divisions (eras, periods, epochs). (This does not need to be drawn to scale.)

The British Geological Survey website includes a geological time chart that will help you. (Note that the Palaeogene and Neogene together are also referred to as the Tertiary Period.)

1b. Using the information given in this section (and the websites shown below), annotate your time line to summarise Antarctica’s tectonic history and the major changes in Antarctica’s climate and environment through time.

2a. Find out about the ‘Ice Age’ (the Quaternary Period), and write a summary of what makes the Ice Age different from most other periods of Earth’s history.

2b. Suggest reasons why the percentage area covered in glacier ice over the past 2 million years has fluctuated much more in the Northern Hemisphere than in the Southern Hemisphere.