What is the ozone hole, and why has it formed over Antarctica? What are the dangers of depleting the ozone layer, and what is being done to tackle this problem?

If you were to ask somebody at random about the ozone hole, there is a good chance they will have heard of the problem: but would they be able to explain what it is and why it occurs? While widely known, the ozone hole problem is one of the least understood environmental issues by the public. A confusing aspect of the problem is its relationship with global warming – that is climate change as a result of increases in greenhouse gases (see Climate change: past and present). Although both problems are the result of atmospheric pollution, the causes and consequences relating to each are very different.

Despite the differences, there are also some links between the two problems. For example, in addition to causing ozone depletion, CFCs are also a greenhouse gas – so phasing out the production of CFCs helps in combating climate change as well as repairing the ozone layer. The steps taken by the international community to reduce global emissions of ozone destroying chemicals also provide an example, albeit at a smaller scale, of the kind of international cooperation that will be needed to tackle the much more difficult problem of global warming.

An ozone molecule consists of three oxygen atoms instead of the usual two (the oxygen we breathe, O2, makes up 21% of the atmosphere). It only exists in the atmosphere in trace quantities (less than 0.001%), but its effects are very important. Ozone molecules are created by the interaction of ultra-violet (UV) radiation from the Sun with O2 molecules: when an O2 molecule is split, the two free oxygen atoms will bond with other O2 molecules to form O3 molecules. Because UV radiation is more intense at higher altitudes where the air is thinner, it is in the stratosphere where most of the ozone is produced, giving rise to what is called the ‘ozone layer’. The ozone layer, containing over 90% of all atmospheric ozone, extends between about 10 and 40km altitude, peaking at about 25km. (Above this level the concentration of oxygen available to be converted into ozone declines so less ozone is formed despite the abundance of UV radiation.)

The ozone layer is very important for life on Earth because it has the property of absorbing the most damaging form of UV radiation, UV-B radiation which has a wavelength of between 280 and 315 nanometres. As UV radiation is absorbed by ozone in the stratosphere, it heats up the surrounding air to produce the stratospheric temperature inversion that is shown in the following diagram.

In the lower atmosphere, temperature declines with height because of the steep decline in pressure from sea-level upwards. This is referred to as an adiabatic temperature change – the air cools simply because of expansion with altitude (and conversely, air under more pressure is compressed and warms up). However above the troposphere, where atmospheric pressure is a small fraction of its sea-level value, the presence of ozone causes temperature to rise with height until the altitude of the stratopause is reached. Above the stratosphere, temperature declines with height in the mesosphere, but rises again in the thermosphere due to the effect of radiation and charged particles from the Sun on what little atmosphere is left near the boundary with space.

Learn more about how scientists in Antarctica collect data about how the atmosphere changes with height. 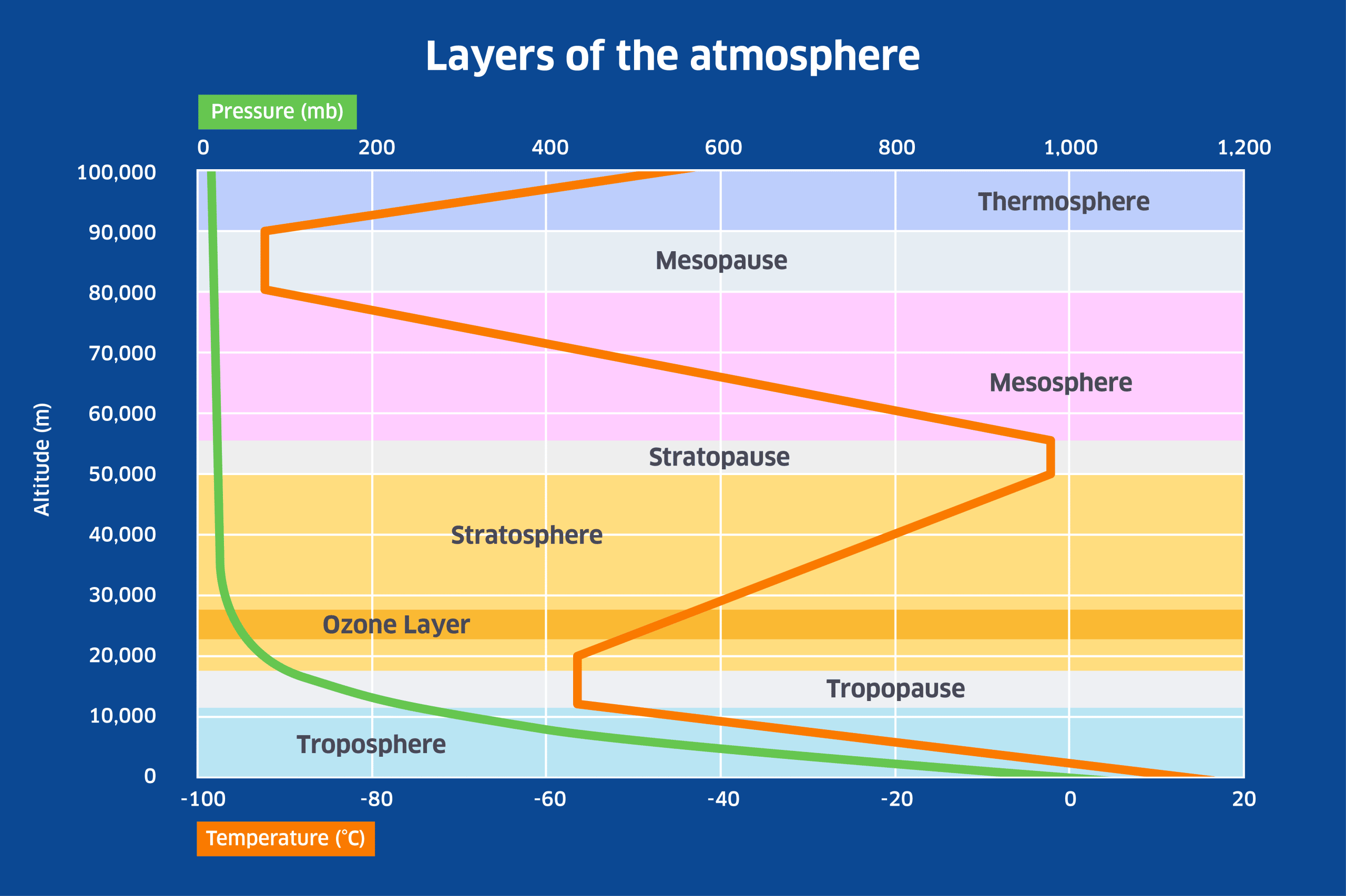 Most of the stratospheric ozone is produced at tropical latitudes, but high altitude winds spread it over the whole planet. It is continually forming and breaking down, and its distribution over the planet is not uniform or constant. Instead, there are seasonal and longer term variations in the quantity of stratospheric ozone in different parts of the world. However, over the long run the natural processes of formation and breakdown are balanced: it is only in recent decades that human activities have led to ozone being destroyed much faster than it can be formed, thereby creating the ozone hole that exists today.

Ozone can also be formed at ground level to produce ‘photochemical smog’; and, as ozone is a toxic gas, there is a health hazard when ozone reaches high levels. This problem occurs primarily in the summer in cities with a high amount of traffic when sunlight interacts with car exhaust fumes containing nitrogen oxides.

There is an irony that human activities have been destroying ozone high in the atmosphere where we want it, while creating ozone at ground level where we don’t want it!

Measuring stratospheric ozone and the discovery of the ozone hole

Ozone is measured as the total amount that is present in a column of overlying atmosphere in Dobson units. One Dobson unit can be thought of as the amount of ozone that would be present if it formed a layer 0.01mm thick at average sea-level pressure and temperature. A typical Dobson reading for the ozone layer is about 300 Dobson units, meaning that the ozone layer would only be about 3mm thick if brought down to sea-level.

The Dobson unit is so named because of the Dobson spectrophotometer which is used to make the measurements. It works by comparing the ratio of two different wavelengths of UV radiation – one being more strongly absorbed by ozone than the other – and using the observed ratio to calculate the amount of ozone overhead.

This method has been used to measure the ozone layer at Halley Research Station since 1956. In 1985, British Antarctic Survey scientists published results showing a steep decline in the levels of ozone over Halley since the 1970s, particularly during the austral spring, and the existence of the ozone hole was revealed. Since then, the extent of the ozone hole has been monitored continuously using both ground-based and satellite-based techniques.

The image from the link above shows the size and shape of the ozone hole as measured in October 2006. Notice that the hole (where values are only around 100 Dobson units) covers most of Antarctica, and areas of depleted ozone (under 300 units) extend beyond the continent.

Reasons for the ozone hole

The ozone hole has developed because people have polluted the atmosphere with chemicals containing chlorine and bromine. The primary chemicals involved are chlorofluorocarbons (CFCs for short), halons, and carbon tetrachloride. CFCs in particular have been used for a wide range of applications, including refrigeration, air conditioning, foam packaging, and making aerosol spray cans. Because these chemicals are so inert, they are able to stay in the atmosphere long enough to be carried upwards to the stratosphere where they can damage the ozone layer.

The actual processes by which CFCs (and other ozone depleting chemicals) destroy ozone are complex and require certain weather conditions to exist. A simplified description of the process involving CFCs is as follows:

The fact that most of the ozone depletion happens over Antarctica also requires some explanation. CFCs and other ozone depleting gases may come from anywhere, but it is in the south polar stratosphere where the conditions become most favourable for ozone destruction. The key factor is the presence of stratospheric clouds and the lack of atmospheric mixing between the south polar latitudes and air from elsewhere during the austral winter and early spring.

Normally there are no clouds in the stratosphere because there is so little water vapour present. However, during the south polar winter, air in the stratosphere above Antarctica drops to temperatures below -80°C; enough to cause thin clouds to form. As long as it remains dark, nothing happens; but when spring arrives, UV radiation from the Sun reaches the Antarctic Circle and starts the process of chlorine release and ozone destruction. This continues until the stratospheric clouds disappear due to warming of the south polar atmosphere as summer approaches. By summertime, stratospheric air from lower latitudes is able to penetrate the polar latitudes, and thereby replenish the ozone layer above Antarctica. Hence, there is a seasonal cycle to the ozone hole over Antarctica with the lowest ozone levels recorded in late September and early October.

While the same processes do act to deplete ozone in the Arctic during the opposite time of the year, the problem isn’t nearly so severe as it is in the south simply because the stratosphere over the Arctic tends not to get as cold as the stratosphere over the Antarctic; and therefore, the formation of stratospheric clouds is not as frequent or widespread in the Arctic. This is mainly due to the differences in the distribution of land and sea between the two areas (see Key factors behind Antarctica’s climate for a discussion of why the Antarctic is colder than the Arctic).

The problem and the solutions

The ozone layer protects life from harmful UV-B radiation which can cause cancer and stunt the growth of plants. As UV radiation can penetrate into the surface of the ocean, marine organisms (especially phytoplankton) can also be damaged. If there was no ozone layer at all, photosynthesis by plants would be impaired and ecosystems could not function as they do today – so it is clearly in our interest to make sure we do not damage the ozone layer.

When the scale of ozone depletion over Antarctica became apparent in 1985, it didn’t take long for the international community to reach a consensus on what needed to be done. If it weren’t for swift political action, ozone depleting chemicals would have continued to accumulate in the atmosphere increasing the size of the Antarctic ozone hole as well as thinning the ozone layer elsewhere: if the problem were allowed to go unchecked, populated areas in the south, such as New Zealand and Australia, and in the north would eventually have seen significant increases in exposure to UV radiation.

In 1987 an historic international agreement was signed (the Montreal Protocol) which came into force in 1989 and set deadlines for reducing and eliminating the production and use of ozone depleting substances. It also promotes research and development into finding ozone safe substitute chemicals for the uses to which CFCs, etc., have been put. It has since been ratified by 195 countries, has been revised several times, and has been described as one of the most successful international treaties. Through its various mechanisms, the treaty has brought down worldwide emissions of CFCs and other ozone depleting chemicals sharply. However, due to the long residence time of many of these gases in the atmosphere (for example CFC-12 resides in the atmosphere for approximately 100 years), the ozone layer will not fully recover until around 2050.

Learn more about the Montreal Protocol:

Learn more about the ozone hole problem in general:

Use the text above, and information from any of the links listed, to write your own summary of the ozone hole. Address the following questions in your summary document:

2a) Copy the data into your own spreadsheet and do the following:

2b) What does the third graph suggest about the effect of CFC-11 on stratospheric ozone?

2c) Why is the third graph not a perfect relationship? Suggest some reasons why annual CFC-11 emission is not the only factor affecting October ozone levels.

2d) Why does the first graph continue to show low October ozone levels in recent years when the emission of ozone depleting chemicals has been declining since the late 1980s?

Using the information in both this section and Climate change: past and future, as well as any of the suggested links, write an essay answering this question: Why does tackling the problem of global warming present a bigger challenge to the international community than the problem of the ozone hole?