What is distinctive about Antarctica’s landscape?

Do the Antarctica Quiz… 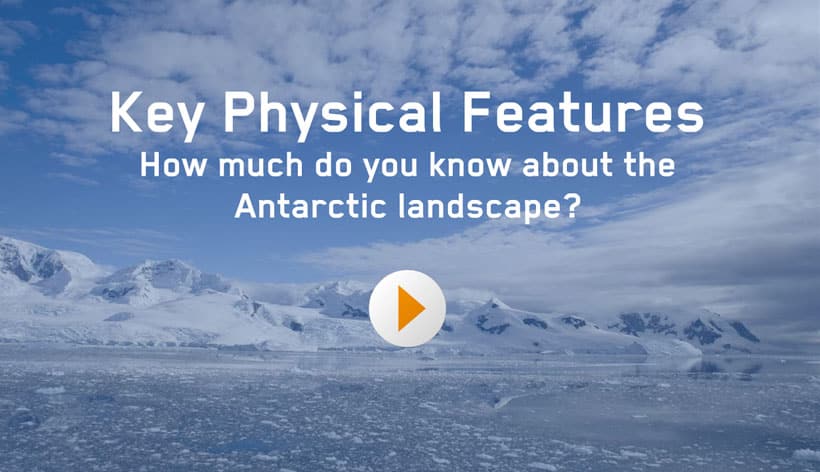 In addition to the continental land mass, Antarctica has several large and small islands; for example, the South Shetland Islands just north of the Antarctic Peninsula. Some of Antarctica’s islands are permanently linked to the mainland by ice, whereas others are connected only seasonally in step with the pattern of sea ice expansion and retreat. Much of the continent’s coastline is fringed by ice shelves. The largest of these are the Ross Ice Shelf in the Ross Sea and the Ronne Ice Shelf in the Weddell Sea. Each of these ice shelves cover an area greater than the British Isles.

The highest, coldest and driest continent

The Transantarctic range contains many peaks above 4000m; however, the highest mountain in Antarctica, Mt Vinson, is part of the Ellsworth Mountains located in the western area of the continent near the Antarctic Peninsula. Mt Vinson reaches 4892m above sea level – a little higher than Mont Blanc in the European Alps.

While Antarctica does have high mountains, it is not because of its mountains that it has the distinction of being ‘the highest continent on Earth’: it is because of the thickness of its ice sheets. Due to this ice cover, Antarctica has the highest average surface elevation of all the continents at around 2000m above sea level (for comparison, the highest peak in the British Isles, Ben Nevis in Scotland, is 1343m); yet in many places the ice surface is much higher than this. In the region of the East Antarctic Ice Sheet known as Dome A the surface elevation is over 4000m. The height of the ice surface is of course the result of both the elevation of the underlying bedrock and the thickness of the ice sheet; and both of these factors vary across the continent for reasons that are discussed in Ice Sheets and Glaciation. In East Antarctica, the ice sheet is thicker and rests on bedrock that is above sea level in most places, whereas in the west the ice is not as thick and much of the underlying bedrock is below sea level.

In addition to being the highest continent, Antarctica is also distinctive for being the coldest and the driest. Its climatic characteristics are described and explained in Key Factors Behind Antarctica’s Climate; although some background is needed here as part of the introduction to the physical landscape. It comes as no surprise that Antarctica is coldest given its geographical position; yet it may at first seem surprising that it is also the driest. Despite being covered in snow and ice, mean annual precipitation is very low, and the climate can be described as a polar desert. Rather than being the result of high levels of snowfall, the vast Antarctic ice sheets exist because the cold temperature year round prevents what little snow and frost that accumulates from melting – hence the ice sheets have been able to build up from small annual inputs of ice crystals over a very long period of time.

Very little of the continent and its islands are free of glacier ice (0.32%), and these ice-free areas owe their existence to specific local-scale factors. For example, there are high mountain peaks that protrude above the ice sheets, like islands in a sea of ice, that are termed nunataks. High winds and steep slopes prevent snow and ice from accumulating on parts of these mountains.

Dry Valleys are another intriguing type of landscape found in Antarctica. These are found in high altitude areas of extreme aridity. Good examples can be found in the Victoria Land region near the McMurdo research station.

Some low lying coastal areas of Antarctica, particularly along the Peninsula, have micro-climate and topographic conditions which cause enough melting during the austral summer to allow some land to remain free of glaciers.

Use an atlas, or the links listed below, to annotate a base map of Antarctica to show the continent’s principal areas and physical features. Download and print the base map.

Links for maps of Antarctica:

On your base map, identify and label the following features and places:

Add contour lines to your existing base map (or a second base map), using an atlas or the weblinks provided. These do not need to be exact. Use 1000m or 500m intervals. Where is the ice surface highest?

Now answer the three questions below:

Add a scale bar to your map. Estimate what is the nearest distance to South America from the Antarctic Peninsula.

Estimate the distance along the Prime Meridian from London to the edge of the ice shelf (Fimbul Ice Shelf) extending from the coast of Queen Maud Land.