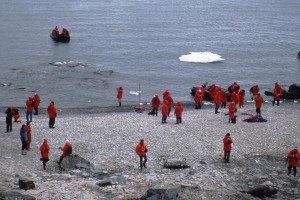 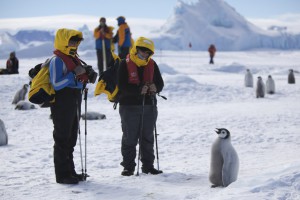 Two tourists are approached by a curious penguin chick

Tourist image with speech bubbles… add your reasons to visit Antarctica as a tourist. 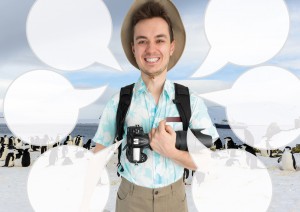 Image of young tourist with speech bubbles for students to fill in with reasons why visit Antarctica.

Information about the work of contemporary researchers in Antarctica.

Blank base map of Antarctica for students to use in projects. 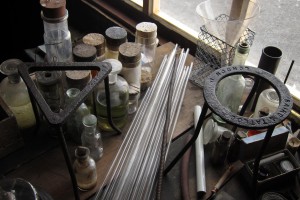 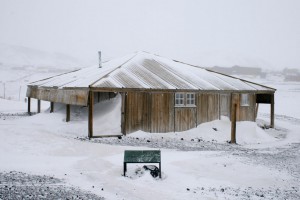 Hut Point was Robert Falcon Scott’s first expedition base in Antarctica, established for the National Antarctic (Discovery) Expedition 1901-1904. The expedition included a major programme of science and was a landmark in British Antarctic exploration resulting in Scott returning to Britain as a national hero. His base became an important staging post for every subsequent ‘heroic-era’ expedition. Today Captain Scott’s first base at Hut Point remains a testament to scientific endeavour. 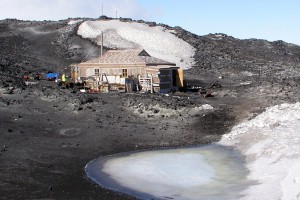 This is the base associated with Sir Ernest Shackleton’s British Antarctic (Nimrod) Expedition 1907–1909. The expedition is notable for a number of firsts. In March 1908 a party of five was the first to climb the world’s southernmost volcano (Mt Erebus). In January 1909, fifty year old Professor Edgeworth David led a party of three to be the first to reach the Magnetic South Pole (an epic 1600km sledging trip). In late 1908 Shackleton led a party of four in an attempt to be the first to reach the Geographic South Pole. After man-hauling for two and a half months, and less than 97 nautical miles from the Pole, Shackleton made a decision, considered to be the finest in early polar history, to turn for home. The expedition also discovered over 800km of new mountain range and pioneered the way to the Antarctic Plateau.